Zoom is a video conferencing app, geared towards business usage. It was founded in 2011, by Eric Yuan, and launched in January 2013.

While gathering considerable popularity and coming to run profitably in the following years, Zoom truly entered the public consciousness during the coronavirus pandemic of 2020. It was to Zoom that users across the world turned to stay in touch during the lockdown effected to stop the spread of the virus.

Prior to founding Zoom, Yuan had helped to build WebEx, in the decade prior to its acquisition by Cisco in 2007. Yuan, originally from China, famously emigrated to the US after repeatedly failing to get a visa (ninth time lucky!)

Many advised Yuan against entering an already crowded space, in which he would be competing with Microsoft (Skype) and Google as well as his former employer. He was confident, however, that he could develop a product more enjoyable to use than the incumbents. 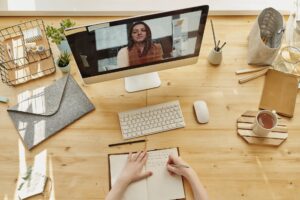 By January 2017, Zoom had become a unicorn, reaching a valuation of $1 billion, as kingmakers Sequoia Capital invested $100 million. This climbed to just short of $16 billion as the company went public in April 2019. Stocks initially priced at $36 were trading for $65 on the first day of trading. While shares would come to decline from the early peak, Zoom ended 2019 running profitably. Revenue was generated through a premium version with added features over the standard free offering.

It was in 2020, as we mention above, however, that Zoom really took off. With people confined to their homes, apps that allowed us to stay in touch became central to our day-to-day lives. People in their droves chose Zoom over other options. Ease of access and careful work to keep latency below 150 milliseconds (the maximum before conversations start to feel unnatural) have been cited as potential reasons.

Why ever people chose the app, Zoom usage shot up in March 2020. Yuan stated in a blog post that over the course of that month, Zoom was seeing 200 million daily meeting participants (not DAU). The following month, this figure had risen to 300 million.  This compares to 10 million in December 2019. The UK cabinet and 90,000 schools in 20 countries were among new users of the app.

The rapid growth in popularity revealed some worrying issues, however. For instance, Zoom was found to be sending unauthorised data to Facebook. It was also found to be hoarding user data, and using a rather novel definition of ‘end-to-end encryption’. Some calls were found to be routed through servers in mainland China, making them subject to the laws of that jurisdiction. Users not well-acquainted with their privacy settings also found that Zoom’s low point of entry meant that calls could be easily crashed by unwelcome, sometimes downright offensive, guests.

In the aforementioned blog, Yuan detailed measures being taken by Zoom to rectify the situation, citing its intended usage as an app for businesses and not individuals. It remains to be seen whether Zoom’s measures resolve the issues – and whether users are satisfied this is the case. We also might also ask whether the app’s popularity will outlast social distancing (in effect at the time of writing).

Either way, Zoom will forever be associated with at least the early days of the coronavirus lockdown – if not more.

Below we’ve collected what stats we could find around Zoom user numbers and Zoom revenue. Read on to see the numbers behind the video conferencing app…

*Daily meeting participants can be counted multiple times, so it is not the same measure as daily active users

Source: Apptopia via The Guardian and The Economic Times

The article is a courtesy of www.businessofapps.com

PrevPreviousLSIA to Provide Information if You Decide to Work in China as English Teacher
NextArdita Bazelli: LSIA, an Open Stage for Many People to Present Their Skills and TalentsNext