While learning any language is going to be beneficial for your career and your personal life, some are more important than others. Aspects of what determines how important a language is globally include:

Today, I’m going to share with you the best languages to learn to stay competitive in the job market.

More than a billion people can be reached once you learn how to speak Mandarin. It’s not the easiest language for English speakers to learn, but the upside is worth the effort.

The number of multinational companies that are looking for executives who speak Mandarin has risen by 35% from previous years. Most importantly, China is set to be the world’s #1 economic powerhouse.

Beyond the major benefits, learning Mandarin could provide for your professional life, it’s likely that wherever you go, there will be native Mandarin speakers you can build relationships with. 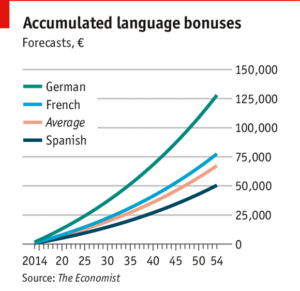 Portuguese is not only spoken in Portugal but also in Brazil, one of the fastest growing economies in the world. Not only that, it’s spoken in 10 countries from South America to Africa, making it a handy language to know by 2020.

Because Portuguese is the 5th most spoken language in the world, you can be reassured that there will be plenty of people you can practice with once you get going.

We should note that Portuguese skills aren’t in demand as much as Spanish skills are, but the demand is definitely growing. Depending on where you plan to travel or the reason for learning it, you should make note of the difference between Portuguese from Portugal versus Portuguese from Brazil.

If you live in the United States, then you’ll know that learning how to speak Spanish is not only a “nice-to-have,” but a “must-have” skill. From entertainment to the number of native speakers and career demands, learning Spanish is one of the best investments you can make as an English speaker.

Today, more than 400 million people speak the language. This number is expected to rise to 500 million or more shortly. It’s up to you to take advantage of the opportunity.

Arabic is spoken by over 300 million people throughout 57 countries around the world. What makes Arabic especially important is the economic wealth that Arabic countries hold, with over $600 billion in GDP.

Knowing how to speak Arabic is the golden key to entering the Middle Eastern economy, which has increased by over 120% in the past five years, an enormous growth rate. Fair warning though, Arabic is known to be one of the most difficult languages to learn for English speakers.

Russia may appear to be isolated from the rest of the world at first glance, but it does have one of the largest economies in the world. It’s a major economic player in Eastern Europe, and you’ll be able to find many people speaking the language wherever you go around the world, including the United States.

Even if you don’t have the desire to go live in India, the number of speakers alone (500 million plus) should convince you to learn the language. More importantly, we’ll see a surge in economic growth as more and more jobs are outsourced to India and as Hindi entertainment (like Bollywood) catches on in western countries. This is a language you’ll want to acquire as an investment in the future of India.

However, since many people in India also speak English, it’s not a completely necessary language to learn, unlike Russian, because most people in Russia don’t speak English.